You are here: Things To Do > The Neptune Fountain 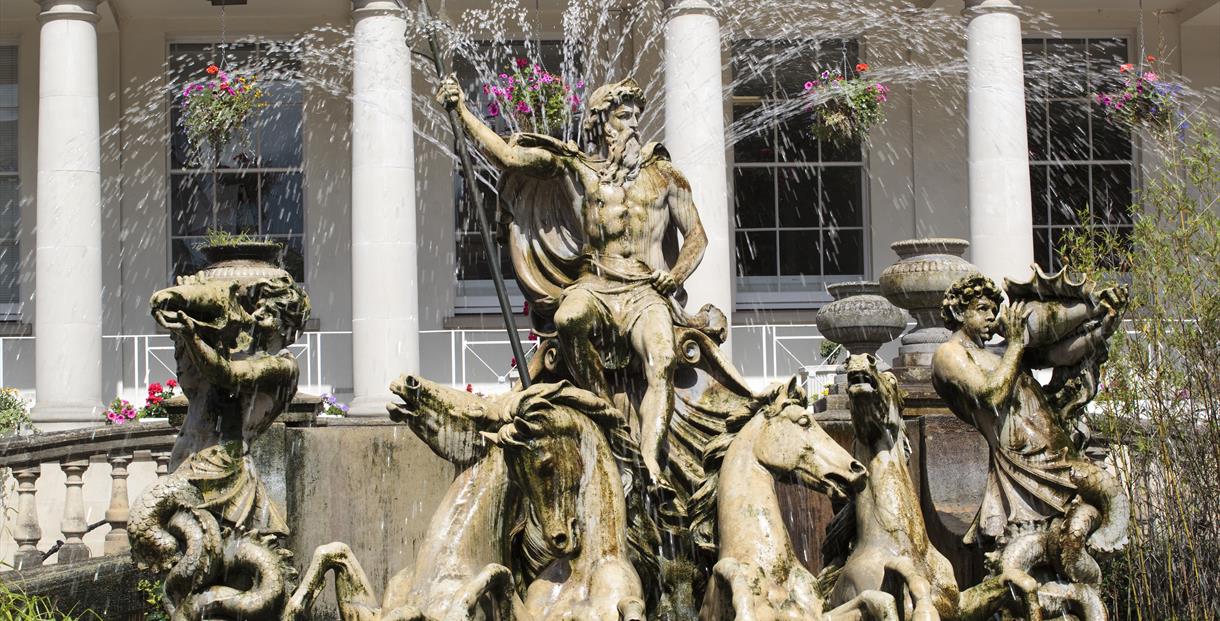 The Neptune Fountain is worth a visit all year round; whether water flows from its faucets or not, the fountain is a monumental statuesque piece depicting Greek god Neptune in a shell-chariot, being drawn by four sea-horses and heralded by conch-shell blowing merman. Neptune sits proudly, clothed in a mantle while clasping a Trident as a symbolic representation of his dominion over the seas, while the horses are depicted in motion, and the entire fountain is enclosed by sculpted balusters and vases filled with flowers.

Purported to have been modelled as an ode to the Trevi Fountain in Rome, Italy (although that has never been historically verified) The Neptune Fountain sits outside the Municipal Buildings on The Promenade. Other sources place its inspiration as Bartolomeo Ammannati and his fountain in Piazza della Signoria in Florence, Italy, although again, this has been disputed!

Unveiled in 1893, it was designed by engineer Joseph Hall and carved from Portland Stone by sculptor Richard Lockwood Boulton and his sons. It is fed from the River Chelt, which flows beneath the Fountain in a culvert which diverts the River through the Town to emerge in Sandford Park. At night, it is beautifully lit, creating an eye-catching focal point on The Promenade.

According to archives of the Birmingham Daily Post, upon its unveiling in 1893 by the then Mayoress Mrs J. C. Griffith, the commissioning of the fountain was all part of rejuvenating and beautifying The Promenade. The Newspaper stated “The Mayors in inviting the Mayoress to open the fountain, explained that this work is only part of a scheme for beautifying the Promenade, and that the long garden in front of Promenade Terrace was about to be converted into an Italian garden, with ornamental railings and with a pretty band-stand in the centre. The Mayoress then declared the fountain opened, and turn on the water. Hearty cheers were given as the stream shot into the air, and the Town Band played the National Anthem. A large crowd witnessed the ceremony.”

The Fountain is cleaned, maintained and cared for by Cheltenham Borough Council, and underwent a full restoration in 1989.