You are here: Shopping > Superdry Cheltenham

We are proud that the world-reknowned clothing brand, Superdry, was established in Cheltenham as a creative collaboration between entrepreneurs Julian Dunkerton (the owner of the Lucky Onion Group including No 131, The Tavern and No 38 The Park) and James Holder in 2003.

Julian started his career in fashion with a clothing stall at the Cheltenham market. This evolved into the brand Cult Clothing, which sold vintage-looking, Americana inspired clothing in towns/cities including Cheltenham, Oxford, Birmingham and Edinburgh.  Meanwhile, James experimented with design and screenprinting, eventually founding the skatewear brand Bench. When the two met, they quickly bonded over their obsession with product, progression and pushing boundaries. By combining Julian’s passion for incredible tailoring, high quality fabrics and vintage washes along with James’s love of typography and graphics, Superdry was born following an inspirational trip to Tokyo.

Superdry is now sold in more than 100 countries worldwide, the headquarters is still here in Cheltenham. From an initial collection of five t-shirts, the brand has grown to offer collections comprising thousands of items and over 500 distinctive logos. Today, they are a global community and have developed a cult celebrity following. The company is listed on the FTSE 250, making them as one of the biggest fashion retail success stories in recent times.

The first flagship store was opened on London’s Regent Street in 2011. Now there are over 500 Superdry branded stores across the globe.

In October 2014, Superdry announced the appointment of Euan Sutherland as the new CEO. Euan knew the business well, having been a Non-Executive Director since 2012, and he was instrumental in driving a five year global strategy that delivered more of the incredible growth that Superdry has become renowned for. Euan stepped down as CEO in April 2019 following the re-election of the founder Julian Dunkerton to the board as Interim CEO.

Total brand sales are currently £1.6billion annually. The business aims to become a £2billion business in the near future and we wish them the very best of luck! 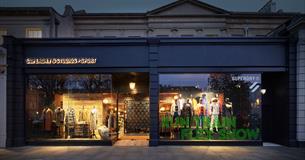